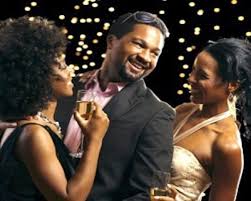 Whenever you’re dating someone, you should observe the interactions that they have with associates, friends, family, etc. You don’t do this to spy, but to see how they treat those that are close to them, because it is a good indicator of how they will treat you. I’ve noticed that a lot of people do not take too kindly to new acquaintances, especially when they are the opposite sex. But is it best to “ban” your mate from having new friends?

I took a poll recently about whether or not heterosexual couples approved of their mate having new friends of the opposite sex. An overwhelming number of men and women stated that they did not like the idea. Three-fourths (75 percent) of respondents said that their mate could not have new friends. Some even went as far as BANNING their significant other from having friends of the opposite sex new or old. But why?

I believe that insecurity and distrust is at the root of the rejection of the idea of new friends entering the equation for many. It’s only right to question who this new man or woman is that your significant other is talking about or spending time with all of a sudden. But there’s a difference between accusing someone of inappropriate behavior because you have proof, and simply being paranoid.

The reality is that we’re going to meet, work with and be subjected to members of the opposite sex. To ban your mate from doing anything, particularly having friends, is just plain silly and unrealistic. In fact, the move breeds even more distrust. Insecurities are no excuse for irrational behavior. You must trust your mate enough not to allow themselves to be subjected to temptation. You can ban them from interacting with the whole world, but if they’re just plain unfaithful they will find a way to whore around.

With that being said, I do believe that while you may not know every single person in your significant other’s life, you should be familiar with people who he/she mentions or hangs with often. If “such and such” is so awesome, then you should know them too. Knowledge of and exposure to your significant other’s new friends allows for trust to be built and the mind not to wander. If you’re in touch with your intuition, then you will be able to tell if there’s cause for concern. Who knows? You might become friends with them too! After all, that should be the idea if you plan on involving yourself in your mate’s life for the long-haul.

Trust has to be a main factor in your relationship when it comes to just about everything. Both parties should work to maintain a high level of trust in one another and assume that you will both honor the terms of your relationship. Going around banning people from being in each other’s lives is the quickest way for what you do not want to happen to in fact occur. It’s time to stop allowing the hurts from your past to control your future, and reward yourself with trust in your intuition as well as your mate that you deserve.